I’m betting those of you who’ve followed my Transformation Day 2012 updates thought I’d given up.  Well, I hadn’t given up, but I also didn’t have a lot of progress to report.  And then there was the issue of photos.  Some of you might recall that I’d promised “during” photos, and it wasn’t until yesterday that I dared to allow my husband to take photos of me.

So first things first.  We’ll get the matter of these “during” photos out of the way.  I have NEVER liked my picture taken, but after having lost almost 40 pounds, I can’t help but with I hadn’t been so camera-shy. 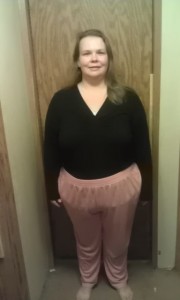 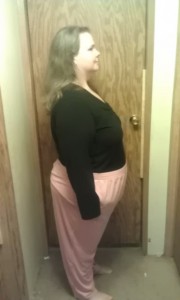 Please forgive the photographer.  As you can see, the lighting conditions are far from ideal, and my dear husband is no professional.  These photos do give some perspective though, and I’ll likely try and get new photos about every 10 pounds or so.

And now that the pictures are out of the way, I can talk about something that’s MUCH more exciting to me.  My weight loss journey has taken an interesting turn.  Some of you may remember that I have essentially maintained last year’s weight loss (within a 10 pound range) since last November.  In an attempt to troubleshoot, I set out listening to some podcasts that I’d been avoiding for a while, and it hit me like a ton of bricks! I’ve been going further and further away from nutritional ketosis with all my eating plan tweaks, and that was the WRONG thing for me to do.

Words can hardly describe how I feel.  I’m energetic (which is something that I haven’t felt in YEARS), my blood sugar is getting better, I’m NEVER hungry, and I have no cravings at all.  In fact, I fixed cinnamon rolls for my youngest child’s birthday, and as I served them, I found myself literally feeling sick to my stomach as I pondered all the sugar in that pan.  It was almost surreal!

When I started this journey back in 2011, I came to terms with the fact that my weight loss would be VERY slow.  After all, that’s how it’s been for me since I started having kids.  When September came around though, I realized that I had to figure this thing out.  After all, while losing 30 pounds in 17 months would certainly be better than gaining 30 pounds in 17 months, I was unwilling to accept that it just had to be this way for me.

At the risk of ruining a good thing, I have the potential to be under 220 pounds by the end of this challenge, and that too almost seems surreal.  I haven’t weighed 220 pounds since 2001!

In the past, I’ve taken flack from folks.  “If your low-carb approach is so good, then why aren’t you skinny?” To them, I say, “I’m not skinny because a low-carb eating plan is only part of the puzzle.” Over the years, with the hundreds of pounds that I’ve lost and regained, I’ve always known one thing to be true.  A low-carb eating plan is a must for me.  Where it gets really tricky is figuring out the “Sarah” plan.  Using myself as a science experiment takes time, and in that process, I’ve learned a ton about what does and what doesn’t work for me.  I’ll never give up on the underlying idea that a low-carb diet is the ONLY way I can get healthy.  I just might spend some time spinning my wheels as I try to figure out the logistics of implementation.