Posted on January 3, 2020 by Sarah Wittekind

After several social media posts, it occurred to me that I should share some thoughts and inspiration here on the blog.  Initially, I hadn’t intended to play on the whole “new year, new you” mentality, but an experience yesterday ended up there organically, and I decided it was worth sharing.

On January 1, 2020, I stepped on the scale like I always do, and I gasped as my scale read the weight.  It was 229.8 pounds! My sons were worried when they heard me gasp, and I made things worse uninentionally by taking a second to respond to them.  I was so shocked though. I hadn’t been in the 220s since 2014, and that was when I was regaining all the weight that I’d lost from 2011-2013. I just couldn’t believe it!

After recovering a little, I decided to have one of my kids take another progress photo.  You see, I don’t typically like having my picture taken. I’m sure a lot of fat people can identify with that sentiment.  At some point in one of my attempts to lose weight though, I realized that if I avoided the camera, I wouldn’t have proof of how far I’d come.  So dispite my discomfort, I have a series of “during” photos that I can put into a slideshow or blog post someday.

After my son took my progress picture, I thought to myself, “I wonder if I can see a difference between this picture and and my biggest ‘before’ picture.” I couldn’t believe what I saw when I put the two pictures side by side.  There it was — objective proof that was hard to ignore. And because I have all my progress photos taken in the same spot in my home, it was easy to compare the differences in relation to things like the door that’s behind me. 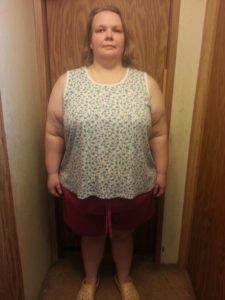 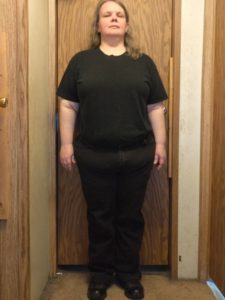 When I was at my highest weight back in 2017, my size 26 “relaxed fit” jeans were getting tight.  I remember thinking to myself, “I found those pants at Walmart, but if I have to get bigger pants, I’m going to have to start laying out real money, and I just can’t go there.” These days though, I’m wearing size 20 jeans and they’re getting roomy.

With those objective data points — reversing my diabetes, losing 60 pounds, dropping clothing sizes — you’d think it’d be easy for me to recognize my progress.  It isn’t though. Even though I’m putting my body into smaller clothes, I still feel like “that fat lady”. I still feel like that same person whose hips were as big as my measuring tape was long.  Something changed in my head when I saw my progress pictures though, and it really surprised me.

We’ve all heard it, right? If we want to stay motivated, we’re supposed to put visual reminders that are supposed to help keep us on track.  The thing was, I always thought that was irrelevant for me because I’m blind. Well, guess what? I was wrong! Seeing the difference had a profound effect on me that I’m still trying to absorb.  Even though I’m only halfway to where I want to be, it’s hard to ignore the fact that I’ve worked hard and I’ve made changes that are sticking.

People like to say that a ketogenic “diet” isn’t sustainable.  Actually, I agree. Any “diet” isn’t sustainable because the psychology tells us that there’s a beginning and an end to it.  I’ve eaten off plan. I’ve failed to follow the proper human diet. As is evidenced by my progress though, I haven’t given up.  How many people can say that about other “diets”? How many people can say, “I want to eat this way for the rest of my life,”, when they’re following a calorie-restricted, low-fat, high-carb “diet”? That way of eating certainly wasn’t sustainable for me, but eating delicious meat and seafood to satiety with a little veg thrown in here and there DOES work for me.  I’ve never felt so satisfied on a “diet”, and I really can eat like this forever, assuming that I continue to manage my addiction.

This entry was posted in Blogs, Low-Carb, Keto & Paleo and tagged keto on the cheap, updates. Bookmark the permalink.