The Power of Restorative Sleep

Posted on January 4, 2020 by Sarah Wittekind 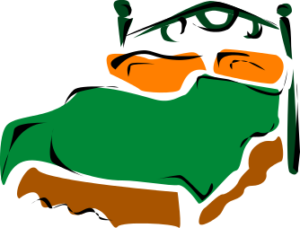 I have struggled with sleep quality for years.  In 2006, I was diagnosed with sleep apnea and I started using a CPAP machine.  Unfortunately, the CPAP was more disruptive to my sleep than the sleep apnea had been, and by 2009, I ditched it.

Sometime in 2011, I was still plagued by terrible sleep, and I thought going back to the CPAP might help.  The problem was, the machine that I’d been using had a recall on it and it had been misplaced in our move, so I never followed through with more sleep testing and a new CPAP.

I continued to suffer from non-restorative sleep for years.  Chronic pain was affecting my sleep, so we got a new mattress.  My health was affecting my sleep quality, so I focused on improving that.  Still, I struggled with overwhelming fatigue. Sometimes, I was needing 12 hours of sleep per day.

There did come a point in all this where I made one observation.  I slept better during the day when my husband wasn’t in the bed with me.  I thought it had something to do with the part of the bed that I was able to lay on while he wasn’t in the bed with me, but until this month, I had no idea how close I actually was to cracking my code for restorative sleep.

In mid December, Fred had an at-home sleep study done.  Then, he had sinus surgery. It was no surprise that the sleep study revealed apnea, but it was a huge surprise when sleep changed dramatically for the both of us.

After Fred’s surgery, he started sleeping on a large wedge pillow.  The pillow is twelve inches thick at one end, and it’s wide enough to support his entire upper body including his shoulders and mid back.  We got the pillow because he was going to need to sleep elevated for the first few days after the surgery, but I don’t think that either of us realized how much that pillow would change things for both of us.

The night after his surgery wasn’t very good for either of us.  He had some bleeding that woke us up in the middle of the night that required our attention.  One of the things that I noticed almost immediately though was the fact that he wasn’t snoring anymore despite the fact that he wasn’t able to breathe effectively through his nose at first.  I’m a really light sleeper, and sounds disturb my sleep, so realizing that I wasn’t being awakened by snoring was pretty powerful.

As Fred continued to sleep on the wedge pillow, we started to notice other improvements.  Fred was actually waking up feeling rested. He wasn’t groggy and cranky when it was time to get up.  That’s something that I haven’t seen from him for probably ten years at least, so it was a little shocking.

I also noticed that on days where we didn’t have to set an alarm, he was waking up earlier naturally.  Regardless of how much I’ve struggled with fatigue and poor sleep, I’ve always gotten out of bed before him.  Now though, he’s waking up naturally after seven to eight hours of sleep instead of ten to eleven hours.

Along with his improved sleep came some pretty dramatic improvements for me as well.  At first, I thought I was just sleeping better because Fred wasn’t snoring anymore, but after about a week of better sleep, it occurred to me.  Not only was I not waking up in the night because of snoring, but I wasn’t waking up in the morning in the pain that had become an everyday part of my life.  It took me a bit of thinking to figure it out, but eventually, I solved the puzzle. I thought back to the time when I felt like I slept better without Fred in the bed.  How was it that I was getting better sleep now while we were both in the bed? It was Fred’s wedge pillow to the rescue again!

Now, I completely understand why folks are so protective of their restorative sleep.  I haven’t experienced anything like this since I was in my early 20s, and I know that there’s nothing but good things to come for the both of us because of this near discovery.  Words can’t express how my life has changed already by the fact that I’m not waking up with terrible pain that I thought was being caused by my mattress. I’m sleeping through the night now which is something I haven’t done in years, and while I still really need eight solid hours of sleep, I’m not dragging through my day just trying to get to the next time when I can lay down and catch some Zs.

The surgeon that performed Fred’s sinus surgery said that we might want to do another sleep study after he has healed from the surgery, but honestly, I don’t know if that’s necessary.  A combination of that surgery and the wedge pillow seem to have been life-changing for the both of us, and I’m not certain that we’ll need to spend more money to diagnose an issue that doesn’t seem to be there anymore.

And every day that I wake up feeling rested rather than painful and angry at the world, I am even more in awe at the power life restorative sleep.

This entry was posted in Blogs and tagged sleep. Bookmark the permalink.