The past few days have been really exciting at the Wittekind homestead.  We’ve made some great progress with some of our projects, but there’s still a lot to be done.

Fred was able to make great progress on the grass in record time.  On both Friday and Saturday, he spent some time mowing, and we estimate that the razor-sharp blades knocked at least a third off the usual mowing time.  With gas near $4 per gallon, this is excellent news for our budget and Fred’s “free time bank”.

On Saturday, we drove up to Lebanon to Central Indiana Organics to buy chicken food.  Yeah, that’s right, we actually drove 70 miles one way to buy chicken food.  As of yet though, we haven’t found a closer source of organic chicken feed that’d work for our girls who’re just turning 8 weeks old now.  I liked the food that I was ordering from Amazon, but even with the driving and fuel cost, it was cheaper to drive to Lebanon rather than having food shipped.

The folks up there at Central Indiana Organics were so kind and helpful.  And even better, they sell a variety of feeds for a variety of animals.  They’ll even custom-blend feeds if you’d like, but you have to buy in 500-pound lots, and since we only have 5 birds now, that doesn’t make a lot of sense for us right now. 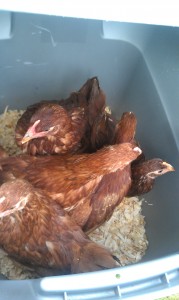 Then Sunday after church, we had company here at the homestead.  One of Fred’s coworkers came with his family.  It was so nice to socialize with good people.  After we ate my favorite meatballs, Fred and Jacob loaded their truck with debris from a chimney demo, and then loaded up our five Rhode Island Red pullets.  See, when we bought the chicks, we got extras thinking that we’d have some losses, but since we didn’t, we had to thin the flock as they’re growing.  So that we’ll have some sort of organization, we decided to give the 5 Reds to Jacob and his family, and this year, we’re keeping the 5 Black Australorps.

We know that those chickens will be beloved pets at their new home, but it was still sad to see them go.  My son, Freddie, took it particularly hard despite the fact that we’d been preparing the kids for the chickens’ departure for several weeks now.  When you spend so much time, energy, and effort on those little guys, I guess you get a little attached.  I know I did.  (Don’t worry.  I could still eat them if I had to, but I certainly have a lot more respect for them as my food now that I know what it takes to raise them.) 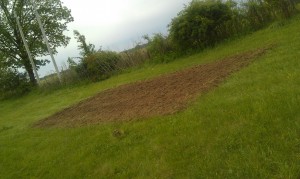 And then last night, I was sitting here minding my own business when my neighbor pulled up on his tractor.  He was ready to till us our first garden spot! I pulled on some shoes and headed out to give him a little direction.  Fortunately for us, he’s an experienced gardener, and he had some valuable input to offer.  I told him that I didn’t want the spot too big the first year because we could always make it bigger later.  He made four passes with the tiller at his tractor to define the garden; then he tilled the ground a second time to finish it up.

I told him, “Watch those stumps.  Fred cut down some trees.”

Then he asked, “Do you know what kind of trees those were?”

“I guess they were just junk trees.  They weren’t producing any fruit, and they were putting shade where we didn’t want it.”

“Well,”, he proceeds to tell me, “those were persimmons from my property.  They need a male and a female though, and I guess mine weren’t close enough, so they never made fruit.”

DOH! In our ignorance, we cut down fruit trees! That being said though, I’ve never had persimmons, and neither have my kids.  And since we don’t eat sweets, I can’t really think of a reason that I’d want to plant another persimmon tree in order to get fruit.  We want apples, pears, plums, peaches, and cherries, SO…

I’m sure that next week will bring lots of exciting updates.  I’ll see a dear friend on Monday who knows everything there is to know about gardening, and now that we have the garden spot done, I can pick her brain for all sorts of advice and ideas.  For those of you who garden, can you share some hints and tricks with us?

I look forward to updating you all next week.  Until then, keep walking that path to personal liberty!