Posted on January 8, 2020 by Sarah Wittekind 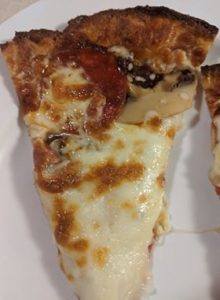 In an effort to keep my family on track with low-carb/keto, I decided to try a pizza dough recipe that I’d never made before.  A girl can only hear so many rave reviews about a pizza crust before trying it, so that’s what I did. I made “Carlshead pizza”, and it was a hit!

Fast forward to December of 2019 when I was binge-listening to all the episodes of the 2 Keto Dudes podcast.  I heard one of the gentlemen mention “fathead pizza”, and it occurred to me that I’d never made that before.  I had just assumed that it would be more of the same disappointing stuff that I’d experienced in the past.  After listening to more episodes though, I was intrigued, and I decided to try Carl’s version that’s egg-free.

My entire family was stunned the first time I made the pizza.  We made something that I had missed from my childhood — a barbecue pizza with pepperoni and mushrooms — and of course it had LOTS of cheese!

Our first attempt made a pretty small pizza.  The “dudes” had claimed that it would make a 12” pizza, but between my son and me, we were struggling to get it up to 10”.  It was still delicious though.

After a couple more attempts where I sturggled to form the crust, I decided to go back to the original recipe that calls for an egg.  I figured that it probably wouldn’t add anything in the way of flavor but I hoped it would make the crust easier to shape. Sure enough, the egg did the trick! I was able to easily shape the dough with my hands (which is important for someone who can’t see), and I ended up with a pizza that fed four of us and allowed for “cold pizza” leftovers the next day.  Winner, winner, pizza dinner!

I’m still really grateful to Carl Franklin for his invention.  Had it not been for him, I never would have discovered a pizza crust that tastes and performs more like pizza than any other keto option I’ve ever had.  And now that I can shape the crust without cussing and hating life, I feel like it’s a huge win for our entire family. While eating pizza toppings is good, having a piece of pizza that you can actually pick up and eat with your hands is something that I haven’t experienced too much.  I mean, I can pick up the Real Good Foods pizzas, but the crust tastes gritty and “off” to me.

I’m sure we’ll experiment with a myriad of topping options.  It’s been a while since I’ve made a fajita pizza, so I’m thinking one of those is in order.  For now though, the BBQ pepperoni pizzas are pretty special, and I can make them quicker than I can make pizzas with a bread dough, so there’s something to be said for that too.  I’m a happy girl for sure!

This entry was posted in Recipes and tagged gluten-free, keto, low-carb, main dishes. Bookmark the permalink.