First Harvest from the 2012 Garden

I wanted to make bratwurst with peppers and onions tonight.  I used onions from a nearby farm, and the bell peppers came from a  quasi-local farmers market.  (My friend Sue brought them with her from about 20 miles away.) There wasn’t anything exciting about the bratwurst; they were just Johnsonville brats that we got at Sam’s Club. 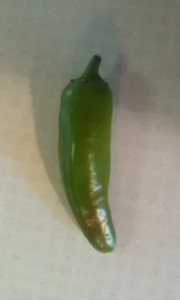 The most exciting part about the whole dinner, for me anyway, was the addition of one, small but perfect jalapeno pepper.  We picked it from the homestead garden this week, and I wasn’t going to allow anyone to eat it until we captured a photo of it for posterity.  After all, it was the first piece of produce that a human might actually WANT to eat from our very first garden. 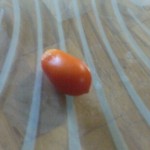 After adding the pepper to the dinner skillet, I suggested that my kids go out to the garden to see if any tomatoes were ready.  My son, Freddie, came back with a small but beautifully red Roma tomato.  Since he loves tomatoes so much, he asked if he could eat it.  I told him, “Sure!”, and before I knew it, he’d popped the whole thing in his mouth in one big bite! He said it was wonderful although I’m surprised he actually tasted it when he gulped it down.

The drought is taking its toll here, but we’ve learned so much this year, and we’re having so much fun trying to grow some of our own food.  How are the rest of you folks doing this year? It’s been a hard year for everyone in one way or another.

This entry was posted in Blogs, Homesteading and tagged food production, gardening. Bookmark the permalink.