I didn’t realize it’d been more than two weeks since my last update until I checked the site.  Things have been so busy and eventful here, and I guess I’ve been slacking. 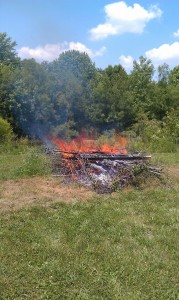 Last weekend was a productive weekend for Fred.  Some of you might remember that we had to cut down a plum tree on our property that was infected with black knot.  Since black knot is contagious to cherry trees as well as plum trees, and since the tree was too infected to save, we had to burn it to protect the other cherry and plum trees on the property.

Fred had tried to burn the brush pile the week before last, but the wood wasn’t dry enough, and try as he might (without being stupid), he couldn’t get the pile to catch fire.  Last weekend though, he did a great job of building a roaring fire that burnt quickly and smoldered for more than a day.  It was really quite impressive! 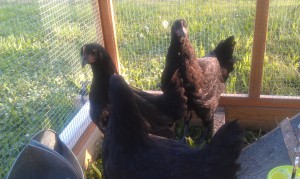 Also, as you might expect, the chickens are continuing to amaze us.  They’re nearly 13 weeks old (as best we can guess), and they continue to delight us all.

Every week provides us at least one chicken story worth sharing.  Last week when I went out to feed them and move their coop, I made the mistake of trying the chore without reinforcements.  I didn’t want to feed them before I moved the coop because I wanted them clear of the “move”.  I opened their door to let them out into the yard, and then I moved the coop.  When it came time to fill the feeder though, they ambushed me! They wouldn’t let me have access to the feeder.  One chicken kept pecking at my bare toes, and another kept pecking at a sore I had on my leg.  (My cat scratched me accidentally.) Abby had to help entice the chickens away from me so I could open their feed bucket, but once I’d done that, one of the girls promptly perched on the edge of the bucket! I was laughing so hard I could hardly get my work done, and of course, Abby thought it was hilarious too.  Next time they need food and moving at the same time, I’ll feed them first, give them some time to eat, and then come back to move the coop after they’ve calmed down.  Lesson learned!

And lastly, although I don’t have any pictures, my garden is doing surprisingly well despite the heat and lack of rain.  The spaghetti squash, pumpkins, and watermelons all germinated and are growing like gangbusters.  Funny thing is, we bought brand new cucumber seeds, and almost none of those germinated.

The tomato and pepper plants are doing great too.  I think I’m going to improvise a drip watering system for all those plants since I’ve been holding on to a load of 2-liter bottles (courtesy of my Pepsi Max addiction.)

We still don’t have our trees in the ground.  Since we’ll be digging all those holes by hand, I think it’ll be a bit yet before I can plant them because the ground is rock solid right now.  (I have a lot of clay here, it’s been really hot, and we haven’t had sufficient rain.) The fruit trees are doing well in pots, but I’d rather have them in the ground.

I hope the rest of you are continuing to work toward claiming liberty for yourselves and your families.  I’d love to hear from you guys! It’s so exciting to make small changes in our lives that actually matter! Keep on keepin’ on, folks!