I know.  It’s been a while since the last update, but there’s been a lot of excitement at the Wittekind homestead recently.  The chickens are growing, the garden’s taking off, and the kids are learning something new every day.  In fact, last Friday, my 6-year-old, Freddie, asked me, “Mommy, are we a farm without a barn?” I didn’t quite understand him, so I said, “What???” “Are we a farm without a barn since we have chickens and a garden?” From the mouths of babes, I tell ya. 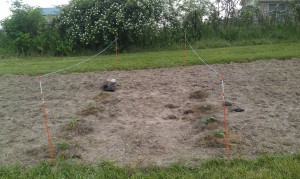 I loved watching my daughter.  She took dirt from the garden (heavy clay) and made “war marks” on her face.  Freddie tried to do the same thing, but he just managed to make his face look really dirty.

On Sunday, we put four Roma tomato plants, two Mammoth jalapeno pepper, and two bell pepper plants into the ground.  Again, the kids were loving the digging, the bugs, the worms, and the weeds.  We still hadn’t picked everything up out of the garden when Fred took the picture, but it was better than no picture at all.

I’ll have a lot of excuses for the garden, but I’m just proud of us for trying.  This is a big deal for us! 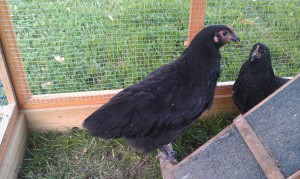 I haven’t talked about the chickens in a while, but ours are doing great.  We received lovely thank you notes from the family who took the Rhode Island Reds, and then Friday morning, we got some really sad news from them.  They lost one of “the girls” to a predator who dug under the coop and came through the plywood floor.  Even though those birds weren’t ours anymore, I really, REALLY felt for them because 1) I know how much they love those birds and 2) we put a lot of love and effort into them as well.

The Black Australorps here at the homestead are getting bigger every day.  The love to follow us around like we’re the mama, and they all love my daughter most of all.  We joke that she’s the “chick whisperer” because they all respond to her.  We carried one out to the garden spot before we planted, and the girl didn’t seem to know what to think.  In fact, she started to make a sound like she was distressed because we didn’t bring the rest of the flock with us.

They appear to change every day.  I can’t believe they’re nearly 10 weeks old now.  We’re all having so much fun!

So how are you folks increasing your liberty this week? We have more planting to do in the garden, and we’re continuing to love these little chickens into egg production.  Exciting times here, definitely!