Canning Projects at the Homestead

Posted on September 3, 2013 by Sarah Wittekind 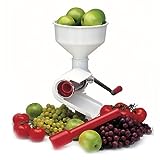 Surprisingly, this summer has provided several opportunities to get more proficient with my canning skills.  And I’m stunned by the value of one purchase that’s made it all go so much easier.

I believe it was last winter when my husband was window shopping at our local Rural King.  He’d been trying to talk me into purchasing a Norpro Sauce Master, but I was reluctant to spend $50 on a gadget that I wasn’t sure we’d ever use.  My husband persisted though, and when he happened to spy it on sale, I gave in and told him he could buy it.  I was still dubious about its usefulness though.

So fast forward to last June.  We received a case of grape tomatoes, and the neighbors and I decided that we were going to make spaghetti sauce.  The neighbors slaved over tomatoes for entirely too long — picking out the bad ones and pitching the good ones into the pot — and we were all utterly sick of it by the time we were done.  The resulting sauce was decent, but it was far from amazing, I thought.  And I was NOT encouraged about the prospect of making more sauce when garden tomatoes were ready for harvest.

Fast forward again to August.  Our neighbor brought us about 50 pounds of tomatoes from his garden.  I was excited by all the free food, but I was a little overwhelmed by the prospect of peeling and seeding all those tomatoes to make some sauce.  That’s when my dear husband said, “Hey, why don’t we look at that Sauce Master that’s been sitting up on top of the cupboard all this time.” I’ve always said Fred is a genius!

He got the contraption down, assembled it, and started looking through the directions.  Apparently, we could just put the whole tomatoes into the hopper, plunge them into the chute, turn a crank, and end up with tomato puree on one side and skins and seeds on the other.  All I had to do was cut some of the larger tomatoes into quarters so they’d fit through the chute.

It was AMAZING how fast the whole thing went, actually.  Kids were picking tomatoes out of the bucket and handing them to me, I was quartering them and putting them in the hopper, and Fred was cranking out loads of beautiful tomato puree.  It went so fast that I ALMOST viewed it as “fun”.

We processed enough tomatoes to fill my 2 gallon stock pot with puree, and then I cooked it down into spaghetti sauce.  Unfortunately, it did burn at some point, but I was able to salvage it enough to make canning it worth my while.  I ended up with 10 pints of spaghetti sauce, and by the time you add some cheese and veg to it, it’ll be ALMOST impossible to tell that I burned it.  Next time, I’ll make it in the crockpot so I don’t risk burning it.

We also found the Sauce Master shockingly useful on apples.  We visited my parents in mid August and they told us we could pick apples off their tree at the shop.  We ended up with about 30 pounds of apples, and I decided we’d make apple butter.

To make the apple butter, we quartered the apples (without peeling or coring), and we boiled them until they were soft enough to run through the Sauce Master.  Running the cooked apples through the Sauce Master yielded about 12 quarts of applesauce which we cooked down in two crockpots.  I didn’t use any sugar in the apple butter.  I just added liquid sucralose, and a good many spices that made it taste AMAZING! After about 24 hours on low in the crockpot, I had 11 pints of apple butter to can.

I have a very productive pear tree in my yard.  The pears usually come in around the middle of September, and this year, I’m actually looking forward to that because I’ll be able to put back quart after quart of pear sauce with very little effort.  The first year we canned pears, my husband worked entirely too hard at peeling and coring pears, and we didn’t do anything with them in subsequent years because we dreaded the work.  Not this year though.  I can’t wait for the pears to come on!

I’m really starting to love this canning business.  It’s easy, and there’s a great sense of satisfaction when it’s all done, especially when you’ve made stuff from free food.  The food’s just there for the taking.  All I have to do is actually DO something with it! I love it! And my pantry’s going to love it too!