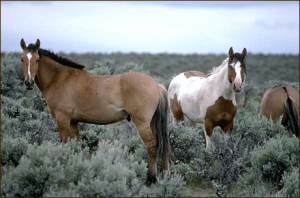 Most of us in the U.S. view horses as pets, sporting animals, or loyal workers on the farm.  With the food that’s available, I doubt anyone thinks of horses as food.  Apparently, companies in the UK see things differently though.  Some ten million burgers were recalled because the beef products contained horse DNA.

Now, I realize that some of you might be thinking, “There are people who eat horse meat,”, or, “As recently as the 19th Century, Americans would eat horse meat if there was no other choice in the winter.” In fact, I’m not even saying I’d never eat horse meat (if there weren’t other protein options that didn’t involve bugs and grubs.) I think we can all agree though that in the U.S. and the U.K., horse meat isn’t usually on the menu, especially when folks think they’re eating beef.

According to one story, the supermarket chain, Tesco, took out a full-page ad to apologize to its customers.  “We and our suppliers have let you down and we apologize.” Let their customers down? In my opinion, it goes WAY past letting them down.  The practice is downright fraudulent!

From what I’ve read, horse meat sounds like it might compare to lean, grass-fed beef or perhaps something like elk or moose.  I’m sure it tastes quite good, actually.  But that’s not the point.  The point is, if I’m going to buy beef, and the package says the product is 100% beef, then it better be 100% beef.  I don’t want to find out about sugar, flour, spices, horse meat, chicken, or turnips being added to my “beef”.  All too often, companies protect their bottom line at the expense of their customers.  “Pink slime isn’t a product; it’s a process.” “It’s less than 2% ‘natural and artificial flavors’, so we don’t have to tell you what we put in there.” It’s absolutely crazy!

I don’t doubt the companies selling the “tainted” meat were sorry.  I think they were sorry they got caught.

While this happened in the U.K., I think it’s absolutely the kind of thing that could happen here in the U.S. too.  That’s why I advocate local food and backyard food production as much as is reasonably possible.  If I buy beef from my farmer friend, I can see his cattle with my own eyes.  I can walk around his farm, I can inspect the butchering facility myself, and I can ask questions.  I know it might not seem worth the extra bit of effort to some, but for me, it drives home the point about being ever vigilant when it comes to the things we put into our bodies.  What we do matters, folks.  Don’t ever forget that.