When Your Vocation Isn’t “In Style” 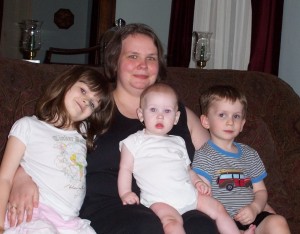 Never in my life have I questioned my vocation.  Even as a small child, I knew that before anything else, I was called by God to be a mother.  I take that charge very seriously, and I’m completely confused by the prevailing attitude that being “just” a mother isn’t good enough.

Anyone who knows me in real life knows that I feel like Christianity, traditional values, and the family are under attack.  American society in general seems to shun these ideas on which our country was founded, and in the process, the whispers of an almost-silent majority cannot be heard over the shouts of a very vocal, very active minority.

In my view, respecting, accepting, and loving a person doesn’t mean that I have to agree with his or her actions.  Regardless of how I feel about things that I view as sinful though, I will express my opinions respectfully.  For me, it’s not hard to respect a fellow human without respecting or condoning their behavior.  I simply ask for the same in kind.

Now, with that understanding of me and my perspective in mind, I want to talk about the vocation of motherhood.  As I said in the beginning of this post, it seems like American society can’t respect those of us who’ve embraced motherhood as our vocation.

I’ve experienced the negative attitudes so many times in my own life.  “Sarah, you’re so intelligent, and I feel like you could cure cancer or do something important if you got a job.”

Now, I know what this friend meant when she said this to me, but I couldn’t help but hear, “Sarah, devoting yourself to the job of mom isn’t that important, nor is it worthy of you and your skills.  You’re better than that.”

All too often today, women who choose to be stay-at-home mothers are viewed as taking the fall-back position.  Folks seem to think that there’s something wrong with a woman who “settles” for the job of mother and homemaker.

What’s worse, they seem to think that a person’s ability to be a good mother (or father, for that matter) is directly tied to their income.  There’s nothing I find more offensive than the person who says, “Aren’t you done yet? Two’s expensive enough.  You can’t pay for a third.”

The folks who view children as liabilities on a balance sheet amaze me.  These folks forget that 100 years ago, people weren’t worried about the “cost” of another child.  And before you say, “Things were different back then,”, I’ll be quick to agree.  Yes, things were very different back then.  Our transportation needs are much different today than they were 100 years ago, but our expectations and “needs” are much different too.

Think about it.  Even into the 1930s, people solved problems by thinking them through rather than just throwing money at them.  Clothes, tools, shoes, and structures were repaired, maintained, and reused rather than being deemed “trash” after very little use.  In today’s society though, you’re viewed as excentric if you don’t buy everything new and throw it out the minute there’s the tiniest problem.  No wonder people think children are expensive!

Also,I can’t help but notice that the change in society’s attitude about mothers seems to coincide with hedonism in abundance! If you’re taught that it’s all about you and what feels good, of course you’re going to have a hard time with the notion that being a parent sometimes requires sacrifice, and we sacrifice because it’s the moral thing to do — not because it feels good.

Along those lines, I’ll never forget watching an episode of Wife Swap (or something like it.) There was a gal on there who had all the money a person could wish for.  Her husband gave her everything she wanted, and they had two kids.  Rather than devoting herself to her husband and her children, she hired folks to take care of her kids so she could shop, exercise, and dine.  She did what she wanted when she wanted to, and she hardly had any contact with her children at all.  I was so sad for her AND for her kids because if money was the answer, why were her kids still suffering (by not having any meaningful relationship with their parents whatsoever)? Money isn’t the answer.  Being less self-centered and more responsible is all it would have taken.

In raising those kids that way though, those parents were teaching those kids that there’s nothing more to raising kids than throwing money at the problem.  If I’ve said it once though, I’ve said it dozens of times.  There’s a huge difference between being a parent (contributing egg or sperm to the formation of a human life) and being a “mom” or a “dad”.

Now, I have to be honest.  I don’t really care what most people think about my choice to be a stay-at-home mom.  For us, it was a conscious choice; it wasn’t a fall-back position because I wasn’t good enough to get a “real” job.  I do wish though, that more moms would embrace their vocation rather than shying away from it.  We mothers have a critical role to play in restoring hope, faith, and family in this country.  It starts with us in the way that we’re mothers to our children, wives to our husbands, and sisters to our family in Christ.  Our jobs are no less important than those who work outside the home, and we should never feel degraded for choosing a vocation that’s crucial to reclaiming the kind of life many Americans want.

And more important than anything else, remember that what we do matters!

This entry was posted in Blogs, Family & Faith Matters. Bookmark the permalink.

4 Responses to When Your Vocation Isn’t “In Style”