Forced to Choose — Catholic or American? 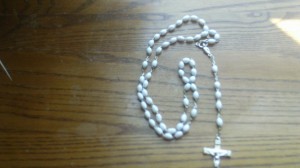 My faith is the foundation on which I’ve built my life and my family.  Until recently, I felt lucky to live in a country where I didn’t have to fear exercising my faith as a Catholic Christian.  As my priest put it in one of his homilies during our observance of “The Fortnight for Freedom” (in so many words), “Never until now have we had to choose between being Catholic and being American.”  I hadn’t thought about it ’til that moment, but he was right.

Some folks might think we’re taking this too far, but one of the most sacred aspects of our faith is the dignity of human life from natural conception ’til death.  Regardless of how folks feel about the birth control issue, I think most reasonable folks can agree that Catholic organizations should NOT have to participate in the distribution and availability of something that is so strongly opposed to Church doctrine.

And honestly, I don’t think my support of religious freedom in this case is unreasonable.  It’s no secret that many Christians feel this way.  Usually the Catholics are the most outspoken on the issue though.  And it’s not like we’re advocating something bizarre and alien; we’re simply asking that the federal government not tell us how to support the dignity of human life.

I suspect that despite the Supreme Court ruling that upheld Obamacare, this issue of Catholic institutions being forced to choose between the dignity of human life and their ability to conduct business in this country will not go quietly in the night.  Just because President Obama provided an extra year to “ease” us into things doesn’t make it any less wrong.  Never in my wildest dreams did I ever think it would come to this, and I’m terribly sadden (and sickened) by the realization that my status as a Catholic Christian is being attacked by my government.