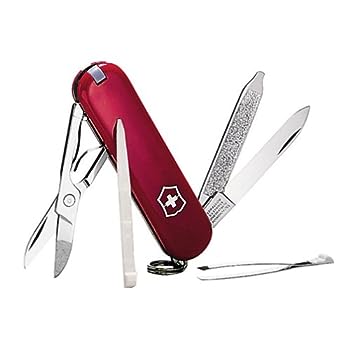 At the end of last year, I went looking for a small, durable, pocket knife and multitool.  I wanted something with decent features that I knew would last, so in February, I settled on a compact Swiss Army knife from Victorinox.

Now, I’ve had Swiss Army knives before, so I had expectations, and I have to say that this little beauty met all of them.  The blade and the tools flip out easily, and they flip back into the housing just as easily.  It’s not too loose or too tight.  The blade and the scissors were wicked-sharp right out of the box, and they’ve stayed that through moderate use over the past couple months.

I definitely like the knife’s compact size, and I love the attached keyring that allows me to hook it to my keys.  I’m certainly not going to be gutting a deer with the small blade, but it works well for everyday tasks that require a cutting tool.  Also, because of the keyring, I don’t misplace the knife.  I simply grab my keys and I know I have a multitool as well.

I also love the mini scissors.  I’ve opened paper bags of chicken feed and dog food with the scissors, and although it takes quite a few cuts to make it across the top of a feed bag, I get a smooth, straight cut that I wouldn’t get by simple ripping my blade across the top of something.

The knife also has a pair of tweezers and a plastic toothpick that slide into the tool’s housing.  To be frank, I don’t know that the tweezers will be much use because they’re quite flexible.  They might work in a pinch for splinter or tick removal, and that was the appeal of that feature when I got the tool.  I haven’t had occasion yet to try them for such a task though, so I may have to come back and update.

I really only have one complaint about this knife though, and it’s probably something that most folks wouldn’t think about until they started using it on a routine basis.  The blade, perhaps the most frequently-used part of this tool (in my experience, anyway), hinges at the end of the knife where they placed the keyring.  This means that if you have the knife attached to a set of keys and you want to use the cutting blade, you end up extending the blade toward the bulk of your keys.  It’s tough to hold your keys out of the way while extending the cutting blade AND keeping all fingers away from the cutting edge as it snaps open.  Perhaps it would have made more sense to put the file/screwdriver tip at that spot on the knife to that it wouldn’t be so awkward to use.

Despite that one shortfall though, this knife is a keeper, and I imagine that I’ll get plenty of years of use from it just as I have with similar knives/multitools.

This entry was posted in Blogs, Prepping and tagged EDC, product reviews, tools. Bookmark the permalink.