Posted on January 5, 2018 by Sarah Wittekind

Back in December, Fred and I were walking through Wal-Mart when we happened across a large stack of smokers near the clearance aisle.  I’d been wanting a smoker for a long time, but I was ready to dismiss the pile.  “They probably won’t do what I want,”, I told Fred.  We ended up taking a long look though because they were marked down to $99.

We talked about it for a minute, and we decided to take note of the model and do some research.  We finished our shopping, and we headed home.

Once we got home, through the wonders of modern technology, we were able to determine a few things.  First of all, the price was fantastic! Amazon sold similar models for $200-$250, and the retail price on Masterbuilt’s site was nearly $300.

Next came the fact that we could use this inexpensive smoker with a cold smoke generator (sold separately), and that requirement was a must for me since I plan to cold smoke homemade bacon.

After some talking and a bit more research, Fred and I headed back to Wal-Mart after 11:00pm to buy a Masterbuilt 30″ digital electric smoker in the middle of December in Indiana.  Crazy, I know! 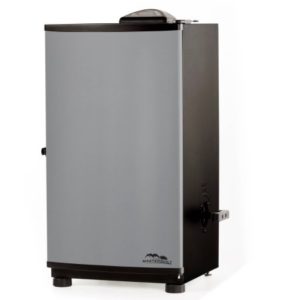 Despite the cons listed above, I’m so happy that we got this smoker.  It has given us a chance to learn the ins and outs of smoking, and it has allowed us to make some utterly fantastic food! 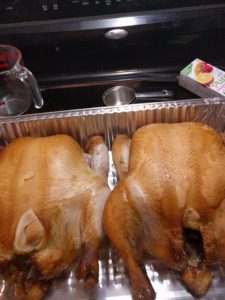 I brined some non-GMO chickens from Sam’s Club to use in our first attempt with the smoker.  It did take a lot longer than I expected — about three hours — and the chickens didn’t have crispy skin, but they tasted AMAZING!

We used mesquite wood chips with the chicken, and we all liked the flavor, we all agreed that next time, we’d use less smoke and we’d finish the chickens in the oven to crisp up the skin. 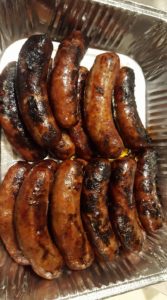 Next, we tried brats.  We didn’t use anything fancy.  We just got some Johnsonville brats from Sam’s Club and smoked them with cherry wood.  When the sausages hit an internal temperature of 140 degrees Fahrenheit, he transferred them to our propane grill to finish them.

My husband said the brats tasted like they’d been injected with cherry juice, and while I didn’t think the cherry flavor was that strong, I still thought the brats were great! In fact, we enjoyed the brats so much that we offered to bring them to a family get-together at Fred’s parents’ house.  They were a hit there too. 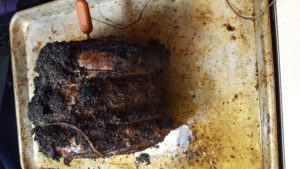 The third item we cooked in the smoker was a standing rib roast.  My mom managed to snag one for us for a good price, and a friend of mine sent me a really great resource called Smoked Prime Rib Made Easy.  I was a little intimidated with this particular roast since I’d never cooked one before, but the instructions, our bluetooth meat thermometer, and the smoker made it so easy.  The roast was cooked to a perfect medium rare and aside from an over seasoning issue — I should have listened to my gut rather than that part of the instructions — it too was really tasty!

We used apple wood to smoke the standing rib roast.  In doing that, we learned that apple wood doesn’t really work for such a heavily seasoned piece of meat.  The apple wood flavor was only barely perceptible.

Although we’ve only had the smoker for about a month now, we’re looking forward to all sorts of delicious things to come, and I’m certain we’ll be sharing our experiences here on the blog.

This entry was posted in Blogs. Bookmark the permalink.