I’ve been experimenting with pressure cooker recipes.  Last night, I made Pressure Cooker Beef and Broccoli Recipe, and I wanted to share my thoughts. 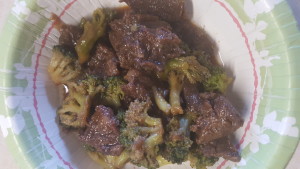 My husband and I decided that we liked this recipe, but there are a few caveats.  First, it was time consuming to make.  I had the help of my son, and it still wasn’t as quick as I had hoped it would be.  Even though I opted to brown the meat in my cast iron skillet while cooking the onion in my Power Pressure Cooker XL, I didn’t seem to save much prep time.

Also, the flavors in the “sauce” were a touch too strong for my liking.  Next time I make it, I’ll likely use half the sesame oil and soy sauce.  My husband thought it was fine served over rice, but I’m not sure I agree with that personally.  The flavor was “right”; I just found the intensity of the soy and sesame off-putting.

I think this recipe will be really easy to adapt to a low-carb eating plan.  I could easily substitute some EZ-Sweetz and a bit of molasses for the brown sugar, and I don’t think the flavor would be lacking at all.  I’ll also try serving it over zucchini noodles instead of rice.

We’ll definitely be adding this recipe to our rotation!