Rabbits at the Homestead — Goal or Dream? 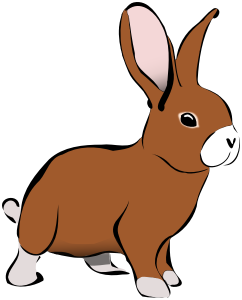 I once remember hearing Dr. Phil say something along the lines of, “The only difference between dreams and goals is timeline.” In the case of the Wittekind homestead, that sentiment definitely holds true, so I’ve decided to set goals rather than dream when it comes to rabbits.

Some folks might remember me discussing last year’s trip to the PermaEthos flagship property for a TSPN Zello meetup.  One of the fine folks there let me “help” with the butchering of a rabbit.  It was at that point that I realized that raising rabbits for meat would be doable, but I didn’t have a solid plan.  I had a dream though. 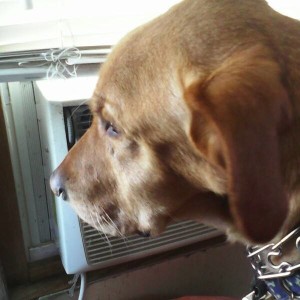 Fast forward to this winter.  We have a pet dog at the homestead who was melting away into nothing before our eyes.  Charlie is a Lab/Mastiff mix who looked perfect at around 85 pounds, but over a period of at least eight months, he managed to get down to around 50 pounds.  It didn’t matter how much we fed him; he couldn’t maintain his weight let alone gain any.

Our vet worked hard to help us figure out what was going on with him, but by mid February, we still didn’t have answers.  He didn’t have parasites, he didn’t have diabetes, and he didn’t have any other sort of endocrine dysfunction, but he was starving.  As a result, he started trying to eat things that weren’t food, and by the end of February, his life was at risk.  When we rushed him to the vet, he weighed 42.6 pounds, and he wouldn’t even drink water.

The vet ended up having to do surgery the next day, and she removed all sorts of stuff that had completely blocked his duodenum.  She had to cut into his small intestine in four separate places to remove all the plastic, string, and wire that were bound up and blocking food from passing through.

Since she had to open him up anyway, the vet decided to send biopsies of his stomach, his small bowel, and some surrounding lymph nodes so that we might get some idea of what was making Charlie so sick.  In the end, it turned out to be extreme food allergies that were causing him trouble, so we set out on a path to get him healed AND figure out how to get the food allergies managed.

After the surgery, Charlie was put on an incredibly expensive food that was high calorie AND incredibly easy to digest.  The problem was, it didn’t take long for Charlie to start itching, so the vet and I had extensive conversations about what kinds of foods might be smart to try.

Since I have experience with feeding bones and raw food to dogs, I took a deep breath and asked her if we might be able to formulate a diet for him that was based on raw rabbit or quail.  I explained that I’d been thinking about raising these animals on the homestead, and Charlie’s issue might just be the kick in the pants I needed to get started.

I shouldn’t have been surprised because my vet is AMAZING, but I was stunned when she told me that she doesn’t like raw diets when they’re made from factory meat, but we could absolutely work something out with animals that I grew and butchered on the homestead.  I was on cloud nine!

We switched Charlie to commercial, limited ingredient kibble from Natural Balance that’s mainly rabbit and potato.  Thankfully, Charlie is thriving, and at his last weight check that was nearly a month after his surgery, he’d gained 13 pounds.  He’s doing so well, and rabbit seems to be working great for him.

So now we seem to have his allergies controlled well enough that he’s gaining weight, but my wallet is really going to struggle here.  I have two big dogs (a white German Shepherd that also has bad allergies and Charlie), and the limited ingredient kibble costs $51 for 24 pounds! How can I NOT turn my dreams into goals with the addition of a simple timeline?

Fortunately for me, I know some smart people who’re successfully raising meat rabbits now, so there are brains to pick when I have questions.  I’ve learned so much already, but I still feel woefully unprepared.  Rabbits at the homestead are no longer a dream though.  I’m gonna do it, and I’m so excited!

This entry was posted in Blogs, Homesteading and tagged food production, rabbits. Bookmark the permalink.

4 Responses to Rabbits at the Homestead — Goal or Dream?