I wanted to build a homemade fodder system for my homestead laying hens, but I’ve had trouble sourcing barley.  Then it occurred to me.  Chickens eat all kinds of grains and seeds, so why hadn’t I gotten growing?

Those of us who have backyard chickens know they’ll eat just about anything.  My free-range birds are no different.  I do feed a non-GMO layer ration, but they go crazy for kitchen scraps, fermented corn, and scratch grain.  Those supplements along with access to pasture keep feed costs down, but I got to thinking after doing some research that fodder would be another great addition to our process around here.  Thing was, I was stuck on the idea that ONLY barley fodder would suit my chickens, so I spent a lot of time focusing on getting barley.

In hindsight, I feel like that was a silly limitation that I’d placed upon myself for no good reason, but at the time, I didn’t really know any better.  I thought that if I sprouted other items for fodder, they wouldn’t be “as good” as the barley and my flock would suffer somehow.  But then I got to thinking.  It can’t hurt to try a bucket-based fodder system with other grains.  Surely that’s better than offering just fermented corn and the layer ration. 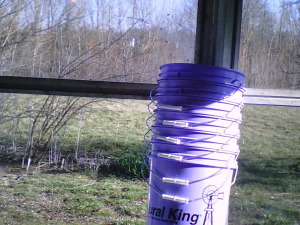 So when I got a coupon for 10% everything from Rural King that wasn’t on sale, I decided to go ahead and get some more buckets, drill some holes, and get to sprouting!

There was a learning curve for me.  Believe it or not, I’d never used a drill before, and I kept making mistakes.  I had to remind my husband that he hadn’t used a drill perfectly the first time he picked one up, and since I’m blind, I had to adapt the process a bit.  In the end though, it worked well, and I feel a lot more confident with a drill now.  Drilling a bunch of holes will do that for you, I guess.

I have a 40lb bag of black oil sunflower seed that I’ll use as fodder.  I also have a line on raw oats and non-GMO corn that’ll cost a LOT less than barley, and they should give the chickens some variety.  I’ll have to post some more updates to let folks know whether or not things went as expected.  Even if they don’t go the way I think they will though, the seeds and grain will have other uses at the homestead, so it won’t be a waste of time, money, or effort.

Jack Spirko over at The Survival Podcast likes to remind folks to just DO something.  Sometimes when you sit around and ponder it too long, you’ll either talk yourself out of even trying, or you’ll waste time that could have been spent gaining experience.  While I didn’t talk myself out of feeding fodder to my hens, I’ve definitely lost valuable teachable moments.  I’m not being hard on myself about that, but I’m acknowledging it.  It wouldn’t have hurt a thing to just try SOMETHING, and I don’t know why it took me over a month to figure that out.