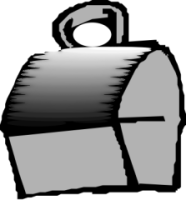 A couple of years ago, I thought I’d seen it all when I read about children being forbade from bringing home-packed lunches to school.  Boy, was I wrong though.  This little jewel of government-sanctioned insanity has to take the blue ribbon!

The short article explains that a girl’s home-packed lunch was supplemented with a school lunch when a state agent decided the child’s meal didn’t meet USDA guidelines.

This story angers me on so many levels.  I don’t even know where to start.  It’s no secret that I blame the government — and especially the USDA — for this country’s obesity epidemic.  Big Ag lobbying and self-serving politicians have determined what’s “healthy” for us — not objective scientists.  The moment the government started making food recommendations that read like the label on a bag of hog feed, Americans got progressively fatter and sicker.  So the idea that a government agent was offering to swap one form of slop for another seems downright ludicrous to me.

It’s no secret that I wouldn’t consider this preschooler’s lunch — a turkey and cheese sandwich, a banana, chips, and apple juice — an ideal choice.  But I’m confused by the government agent’s determination that the girl’s lunch was lacking.  What? Did they want the girl to suck down a carton of sugar-laden chocolate milk too? Were the chips a problem because they weren’t “whole grain”? (For the record, my children are offered corn chips at lunch when they get “taco in a bag”.)

Despite the fact that I wouldn’t go to the effort of sending that kind of lunch to school with my children, I still respect the mother’s right feed her child the way she sees fit.  The child wasn’t being poisoned; she wasn’t being starved.  While I’d love to see everyone eating real, Paleo-type foods the majority of the time, insisting that I know better (even when I do) sets a dangerous precedent.  It scares me, and I’m angry for this mother who had to pay $1.25 so that her daughter could eat three chicken nuggets.

The pink-slime-filled, meat glued, refined, pesticide-drenched slop that passes for food in our kids’ schools is frightening.  What’s more frightening though is the fact that it’s now being shoved down their throats with no regard to a parent’s wishes.  The slippery slope absolutely applies here.  The issue goes so much deeper than a kid being fed chicken nuggets when she brought her lunch to school.  It’s scary, scary stuff, and we have to remain vigilant.